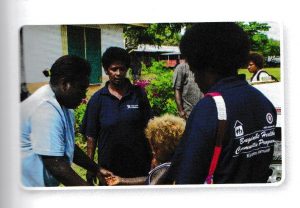 Village Health Volunteers travel through difficult terrain to make sure no one is missing out on the cure for leprosy.

For example: the week  from 14th to 20th June is about Papua New Guinea and Bougainville. I have copied some of that below:

The Leprosy Mission Papua New Guinea’s (TLM-PNG) role is to support the Government’s National Leprosy Elimination Programme to ensure people affected by leprosy are detected and treated with available and accessible leprosy treatment. There were 577 new cases of leprosy found in 2019. TLM-PNG has 3 projects—in livelihoods, health and leprosy detection.

Monday—please pray for the continued safety of all staff members and village health volunteers. They often travel long distances to remote communities in bad weather and rough terrain. Praise God for their devotion and heart for leprosy-affected individuals and families.

Tuesday—Pray that the partnership between BHCP and the Government’s Department of Health will be strengthened.

Wednesday—Praise God for the Western Province Project, funded by TLM Australia. Even though it has been challenging to implement this in a Covid-risk border province, the increased numbers of new leprosy cases found in the province indicates success with the health worker training.

Thursday—Pray for TLM-PNG’s Country Office staff as they coordinate the projects and pursue new funding opportunities.

Friday—Praise God for the successful start of our second New Zealand Aid funded Strengthening Health in the Communities project. Pray for the 25 communities involved in the project as they learn how to manage health better within their own communities.

Saturday/Sunday—This is the fifth year of the New Zealand Aid funded Sustainable Livelihood Development project. Pray for the project participants affected by leprosy and disability, that they will continue to implement their livelihoods and find ways to sustain their businesses even during challenging times and beyond the end of the project.