With the general election less than a week away, the afternoon of Sunday 8th December saw a hustings event take place at our church, the result of a collaboration between ourselves and St Michael’s Parish Church. We provided the venue and Revd. John Castle organised, inviting the five candidates and publicising around the local area. As the audience arrived, each was invited to write a question and as so many were received, they were sorted into common topics. In the event, the Green Party candidate was unable to attend, but as proceedings were about to start, candidates from the Labour, Liberal Democrat and Conservative parties and an Independent candidate took their seats at the front of the church facing a virtually full church with some 90 members of the public attending.

Rev. Sharon Gardner welcomed everyone and after a prayer handed over to the master of ceremonies, the Rev. John Castle, who explained the ground rules and asked for everyone’s opinions to be met with respect. Each candidate was given three minutes to introduce themselves and explain why we should vote for them. Questions from the audience were then put to the candidates, topics covering Brexit, the health service, education, immigration, climate change, abortion and euthanasia. The candidates responded well to being put on the spot with no advance notice of the questions. An hour and a half later, the formal session was being wound up with closing remarks from each candidate; they paid tribute to each other in the respectful manner in which the entire local contest had been fought, in contrast to the experience elsewhere in the country.

Discussions continued informally over refreshments in the Schoolroom, and many people commented that they were grateful for the opportunity to meet the candidates and hear their views. 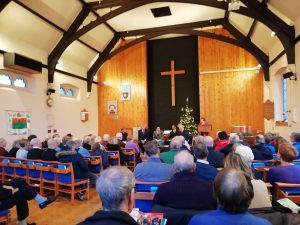