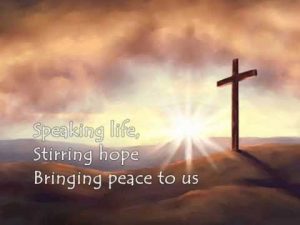 See what a morning, gloriously bright

with the dawning of hope in Jerusalem;

as the angels announce Christ is risen!

See God’s salvation plan, wrought in love, borne in pain, paid in sacrifice, fulfilled in Christ the man, for he lives: Christ is risen from the dead!

Those words are the opening verse of Stuart Townend’s Resurrection Song (the words in the image come from its second verse). It’s a hymn which rejoices in the Easter message: the triumph of light over darkness, of good over evil, of love over hatred, of life over death. Townend is a modern hymn-writer who has composed some great tunes with some brilliant lyrics. Others of his you might know are The Lord’s my Shepherd, (Trust in you), In Christ alone and How deep the Father’s love. His Resurrection Song is certainly one of my favourite Easter hymns. What are yours?

Hymns and songs, both traditional and modern, mark out that last week of Jesus’ life. We shout our hosannas on Palm Sunday and sing Ride on, ride on in majesty, and then celebrate Easter with the exultant Christ the Lord is risen today! Were it not for such heart-wrenchingly beautiful hymns like When I survey the wondrous cross and There is a green hill far away, we could be in danger of going from one joyous Sunday to the next with no stopping at the Cross on Good Friday to consider the cost of Christ’s sacrifice.

Yet no hymn-writer or poet can do justice to what Jesus endured. Many have written movingly about the crucifixion, but no one could truly appreciate the horror of it unless they were present. What he felt in the midst of that quagmire of brutality, violence and pain we can’t even begin to imagine, but the echo of the loneliest words ever spoken ring out down the centuries: ‘My God, my God, why hast thou forsaken me?’ Oh, whose heart was breaking the most – Jesus at being abandoned by his Father in his hour of greatest need, or the Father as looked on his beloved Son and for the sake of all humanity held back his legions of angels and did nothing?

‘The wonder of your cross shall be our meditation’ is a song by Robin Mark. In its last verse it imagines what it might have been like in Heaven as that dreadful Friday turned at last to Easter morning:

Were Heaven’s praises silent in those hours of darkness?

Your Holy Spirit brooding round the empty throne?

Until the declaration ‘He is risen!’

You are risen, Jesus!

He is not dead, behold he lives forever more!

I find that such a powerful image: all of Heaven waiting in silence; misery on earth reflected above…until….until……that wonderful moment when death’s hold on him was broken and Love burst from the tomb. Do angels cheer like we do? I think they might have done then!

This Eastertide may the wonder of the Cross be your meditation. As you gaze upon it in church during these coming Sundays, may you remember the gift of God’s love so dearly bought yet so freely given, and, as Easter Sunday dawns, may your alleluias ring out with those of the angels.

With every blessing, this Easter and always,