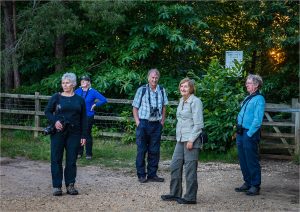 As we approached the car park, some alarm as it was full – had the fame of Robert’s walks spread abroad and eliminated us?  Luckily for us, hungry people had been lured here by the kebab van and as one person was served and departed, gradually all of our four cars were accommodated, albeit Tricia and Jon’s straddling an extremely large puddle, soon to be classified as a pond.  As it was still light, we walked around the woods and heathland and spotted a hobby and a sparrowhawk – two birds of prey – enough to keep me happy for a week!  We then watched a magpie and a crow pretending to be flycatchers as they caught moths way up in a pine tree.  Some of our party even traced a smoke trail for a while under the impression it was a UFO, but reluctantly decided it was a plane trail – well, it is a while since they’ve graced our skies.  And as the sun set, we settled down to watch a more open expanse of heathland for the main event of the evening …. and the subjects did not disappoint!  At first we spotted a pair of nightjars flying from behind us to settle somewhere in the gloom.  We could then hear this wonderful call – singing like mini motorbikes – which was hard to trace to its source, though sounding very near; I found that almost as exciting as spotting them.  After a couple more sightings and just as we’d decided to call it a day, we had a magnificent flypast when a solitary nightjar emerged to shoot up in front of us and flew right over our heads, even adding a brief circle, a truly worthy ending to our expedition!  Let the rest of the nation make do with Springwatch, we at SYMC have Robert!!  Many thanks to him for these wonderful interludes in the midst of lockdown.