With the easing of the recent government Lockdown Guidelines, Robert Godden was able to lead small parties (of up to 6) around the local countryside. Heather and I took part in the second and third walks that day (of five!).

At 10 A.M., a time at which I am no longer used to being active, we met up with Robert and Sue Truby at the Shepherd Meadows car park. For those of you not familiar with this part of the Blackwater Valley (I wasn’t), the car park is opposite the entrance to Raeburn Way. The meadows then extend south from the car park towards the Meadows Roundabout  – a hidden, tucked-away tiny gem of countryside. 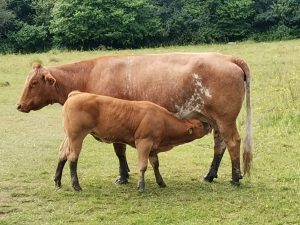 My immediate surprise was to find that the meadows are still grazed by cattle and that these keep the meadow trimmed and looking like a classic English landscape by Constable. Though we saw no sign of any orchids there (my personal ambition that day), Robert did introduce me to a flower that was totally new to me – Devil’s-bit Scabious, looking somewhat like a purple clover flower atop a stem of modest length. We also saw various butterflies: Monarch, Meadow Brown and Large Skipper, plus a couple of instances of Cuckoo Spit on a few tall grass stems – something I have not seen much of since I was a boy.

Around noon we parted company with Sue (just finishing her second walk that day) and arranged to meet Robert at our next rendezvous: Old Winchester Hill, situated on the South Downs Way just over a mile due south of West Meon. There, we met up with Robert once more and also Tricia and Jon Needes.

Once assembled, we walked around the hill’s Stone Age fort. It’s northern flank was fertile ground for spotting more butterflies including the Dark Green Fritillary, but alas there were still no orchids. It wasn’t until we looped round to the southern flank, with its view of the Isle of Wight, that we finally found some.

I was very pleased at last to take some close-up photos of the Common Spotted Orchid, Pyramidal Orchid and Fragrant Orchid. Another new discovery for me was the rusty-red-coloured seed heads of the Hay Rattle which, Robert told us, parasitises & kills grass roots but farmers tolerated it because its characteristic sound of seed heads rattling in the breeze told them when it was time to gather grass for silage. 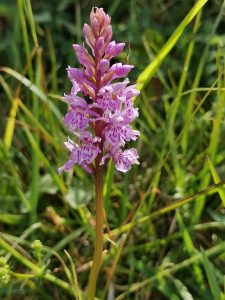 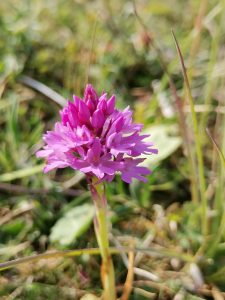 Seriously, if you have not joined Robert on one of his guided walks, what are you waiting for? You are missing a treat.