Our recent service that was led by John Amankwatia was something that everybody who knew him, was looking forward to, with friendly anticipation. He had left us very suddenly, so we were all looking forward to seeing how life was treating him, nearly three years on from that.

Also in attendance were his wife Teresa and daughter Rachel. They had all travelled down from Muswell Hill in North London. Our first sighting of John entering the church was with his broad smiling face, so characteristic of his great charm. This led to a spontaneous round of applause for him, which signified the love for him from all the church family. 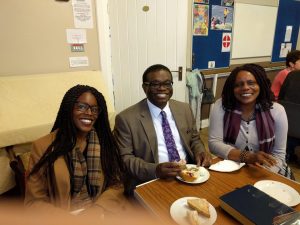 He was keen to move on from his previous dark days and reminded us of the trust with which he had put his life in God’s hands. This was a very strong reminder to us all, which we should all be following. It was a great testament of his walk with the Lord.

In his service he used the biblical references from Isaiah of the ‘Song of the Vineyard’ where the plants were well tended and fed but yielded only poor fruit. It was used as a parallel to say that  it was due to the fact that they were tended by those who only had self interest at heart, rather than God’s spirit ruling their lives. The second reading in John about the true Vine and the Father as the gardener was a familiar reading. After talking about the pruning of the fruit it says about remaining with him  in order to fulfill his commandments, and finally the greatest commandment (v17) to ‘Love each other.’

Around this powerful message John structured his whole service and the chorus from Colours of Dawn hymn which went as follows, summed up the message of the service:

So light up the fire and let the flame burn,

Take seeds of his spirit, let the fruit grow,

Tell the people of Jesus, let his love show.

After this uplifting service we went into the English room to enjoy a time of fellowship over refreshments and a good spread for lunch. Here we were joined by a few ladies from Bagshot church who were keen to meet up with John and his family. 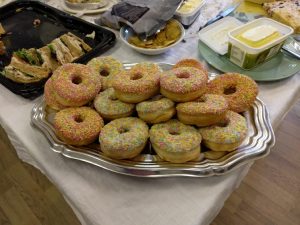 Altogether it was a truly delightful occasion.