Chris Stratta from The Leprosy Mission came to our service on 19th May.

Chris has been with TLM since January and it was a pleasure to hear him talk about his calling, initially to spend 6 months in India, and now, via a number of other positions, working for The Leprosy Mission.

The slides featured Paralympian Stef Reid who visited Anandaban Hospital, and is featured in the latest TLM newsletter:

GB Paralympian Stef Reid lost her right foot in a boating accident, aged 15. Her talent and tenacity have seen her become a triple Paralympic medallist in the long jump and 200 metre sprint but it is her heart to encourage others struggling with disability that makes her stand out. She recently took time out of training for the Tokyo 2020 Paralympic Games to meet leprosy patients at TLM’s Anandaban Hospital in Nepal.

So that Stef might literally ‘walk in the shoes’ of a leprosy-affected person, she had her state-of-the-art prosthetic foot replaced with one made in the workshop at Anandaban Hospital. 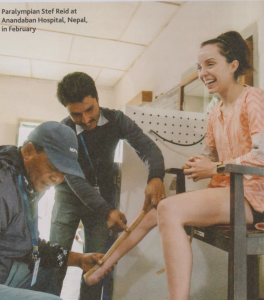 She said “A lot of the way they did the casting was really similar to what I experience in the UK, and this is bearing in mind I go to an amazing private clinic.”

Pick up your copy of the May TLM newsletter from the vestibule to read more about this and other people living with leprosy in Nepal and many other areas of the world.

The saddest thing of all, to my mind, is that leprosy is completely curable, yet so many people are scared to admit they have the disease—partly because of the stigma attached to it, but also because they don’t know that they can be cured. So people often delay getting the diagnosis.

As little as £24 can pay for the diagnosis and treatment for one patient!

Thanks Robert for organising for Chris to come, and the collection that we had earlier in the year (when the government was doubling up on donations).