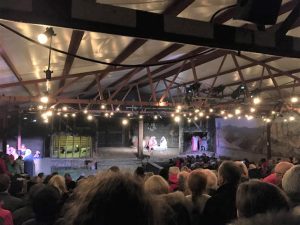 For their December activity, the Thursday House Group planned to attend a late afternoon performance of the Wintershall nativity set in the countryside near Bramley south of Guildford.

An invitation was extended to anyone in the church to come along, so on the last Thursday before Christmas three cars pulled up in the field serving as a car park bringing a group of ten from the church, all wrapped up warm prepared for anything. Nevertheless no one wanted to get out of their car – the rain was lashing down and we all knew we were in for a soaking. But surprisingly the rain stopped after a bit and we made our way up the hill to a field where the first scene was to be set.

There was a delay getting started as the donkey was being an ass, but eventually the shepherds appeared and busied themselves around the flock.

Meanwhile Mary and Joseph rode past and we moved over to the barn to watch as they were offered somewhere to stay.

The activity returned to the field where the shepherds were huddled around a fire tending their flock – in the dark our leader wasn’t able to keep such good control of his flock, but wherever the others got to they were still able to follow the proceedings. An angel appeared with the news of Jesus’ birth and the remaining activity was played out in the comfort of the barn.

It was an interesting portrayal of the Christmas story up to the arrival of the wise men, with flash-backs to earlier events such as the angel appearing to Mary. The barn offered a rustic environment complete with farm animals, shelter from another rainstorm outside, and music was provided by local players and a small choir of schoolchildren.

It was an enjoyable and different experience and somehow we returned to the cars without being rained upon at any time!